Showing posts from April, 2011
Show all

This was the theme of our annual zambian convention this year! ZAMCON 2011!

So here it is, bits and pieces in pictures of our great time! Welcoming our numerous visitors from all over, Pr Morkley from Ghana, Pr Ray and his group from Carlisle, PA, Pr. Scibelli, Latasha Brown, Bella and Andy from Baltimore, Pr Adam and familly from Kitwe, Pr Jabu and his group from Pretoria, South Africa...

I was going through notes and papers today and this is what I found, a poem that Chris wrote a few years ago and I thought I would share it with you all...

There once was a man a bondlave to sin, He could not get out of the filth he was in. Torn back and forth by whim and desire, He knew that his path was destined for fire. At last the great auction block he was placed on. His head down in shame, his hope was all gone. For no one would bid for he was scarred yes indeed,a Not pride, lust, or envy, sickness or greed.
But there appeared one bidder, whose bid was real low. His face shone a light with a mysterious glow. On his face was a mischievous smile, For He knew what he wanted all the long while.
For he wanted to send this man to the pit, Where no light is present and fires are lit. For he wanted to send this man to hell, But then all heads turned in response to a yell.
From a Man whose garment was oh so white, It would outshine the whitest, brightest of lights. He said I’ll take that sinner, I’ll pay the cost. I seek all who are laden, weary, and lost.
But the other man said, “I’m sorry too late I’ve already bought that sinner he comes to my place…
1 comment
Read more

Some pictures of this past month...Dave Petersen's visit to Lusaka... and some more news coming up soon... 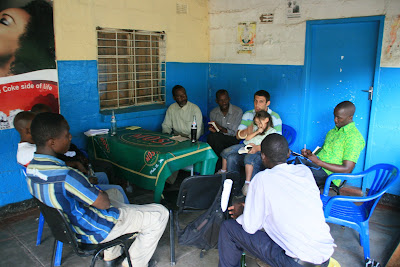 UNZA Bible Study  Every Thursday, we go to the University of Zambia the biggest university of the country for a time of evangelism and Bible study!


Our 5th Church in Lusaka  Greater Grace Church of Kanyama

Day out at the Zoo
Chris and Dave Petersen