An incredible miracle in Malawi

Living in the Third World, we see death in our face a lot more frequently than we would like. It seems like weekly occurrences of funerals from neighbors or extended families in our church or Bible college from a variety of causes: Malaria, High Blood pressure, strokes, traffic accidents. Etc. Unfortunately many of the deaths are children, and also unfortunately many could be prevented. In the compounds, local neighborhoods, it is not uncommon for children to fall in poorly covered hand-dug wells or septic tanks. A mother will be cooking and let her child play outside and the unthinkable happens. 9 out of 10 times it means certain death as the wells can be up to 20 feet deep and full of water especially in rainy season.
All of this went through my mind this past Sunday as I received a report that one of our Single Mothers, Alice, had her son fall in a well. Immediately I thought we will be doing a funeral. To my amazement, I was told that he was in the hospital and improving. Obviously an act of God had spared this child. Again to my greater amazement, as I was speaking, Alice and her son walked in the church. I stopped my message mid-sentence to inform the church of what happened. All of us were blown away that she had come to church. The event had happened on Friday evening. We just all stood up and raised our hands to God in thanksgiving. Before closing I asked Alice to give a testimony of what actually happened and we were all awestruck.


Steven George(Alice's Son who was named after Pr Scibelli And my father, Pr George) is a very active 3 year old. He and my son constantly run around the church, we call them our future stunt men. They are jumping and rolling without fear. Steven had been playing outside his house with his friends while his Mom was cooking on the patio. After a few minutes of not hearing her son's voice Alice began to look to where he wandered off to. The other friends began nervously pointing to the community well that is usually covered. She could faintly hear Steven yelling "Mama!" at the bottom of the well. The Neighbors sprang into action. A man started shimmying down the well and to his amazement he found Steven pressing his arms on both sides of the well just to keep his head above water. When they got him out, they found he had swallowed a great deal of water. In Malawi the quickest way to the hospital is the back of a motorcycle, which Alice had no money for. By God's Grace the neighbors gave money to get him there. Upon arrival they tried to give Steven a medication to make him vomit out the water, but after refusing the pill, he just ended up using the little boys room and all the water past. Alice said that if God delivered the Hebrew boys from the furnace that He would deliver her son from the well. And there Steven George was running around the church as a living testimony. Amazing! 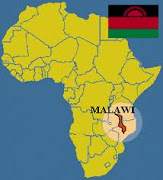